Three Tips to Preventing Frozen Pipes in the Winter

It can happen to anyone during a cold winter. You turn on the faucet of your bathroom or kitchen sink only to find that nothing is coming out. Maybe there’s a tiny trickle of water, but for all intents and purposes, your pipes are blocked. This can happen for a number of reasons, but when temperatures drop below freezing the culprit is usually frozen plumbing.

Frozen pipes can cause a lot of headaches that go beyond simply not having water. Water expands as it freezes, and that can put a lot of strain on your pipes. If this goes unchecked, you could be dealing with some costly plumbing repairs in the near future.

If frozen pipes are a common problem in your home, there are some things you can do about it. As with most home maintenance and repair issues, the best way to deal with frozen pipes is to keep them from freezing in the first place. This sounds difficult since nobody can control how cold the weather can get, but there are some simple tricks that should help keep water flowing through your pipes even in the dead of winter. 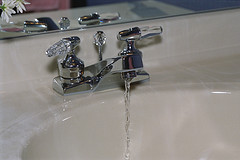 The Harm in Frozen Pipes

A burst pipe can cause thousands of dollars in water damage. Regardless of the material of the pipe; there is no escaping the expansion properties of water when frozen. When this happens, you may need to replace your entire pipe system and this can be anywhere from $4000 – $8000 for the materials and services. Furthermore, the pipes that are the most susceptible to being frozen are the ones that are either outside of the house or in the basement. Most homeowners assume that there is a blockage where the water comes out, but this is usually not the case. This can cause even more damage as the homeowner spends precious time investigating why his/her water is not coming out. By the time the homeowner has discovered the source of the problem, the frozen pipe may have already burst. It’s important to stay educated and vigilant on how to avoid frozen pipes. Running water continually through the pipes is a great way to protect your pipes. This is because running water is much less likely to freeze than still water in a pipe.

You can minimize your water bill by just allowing your faucet to drip. Minimal movement in the pipes can go a long way in making sure you don’t come back to a burst pipe!

Leave the heat on

Leave the heat on even when you’re not home. This may seem self-explanatory, but if you turn down the heat when you go away for the weekend you may come back to find frozen pipes and property damage. The heat does not need to be extremely high, just enough to discourage the pipes from freezing while you are keeping the temperature at a minimum of 55° Fahrenheit or higher.

Put foam or rubber insulation around your pipes that are most at-risk (outside or in colder areas of the house). Adding insulation to the pipes is a cost-effective method to ensure that your pipes will not freeze even during the coldest winters. Insulation is usually employed on pipes that are outdoors because while insulation is cheap, breaking walls to get access to pipes hidden within the walls can be an expensive endeavor.

Keep the garage door closed. Some homes have several pipes running through their garage. Having an open garage during the day is customary for some families, but this could allow the temperature to drop to dangerous levels. Garages are often colder than the other parts of the house, even when they are closed. Opening and closing the garage to leave the house will not be detrimental, but we advise against keeping the garage door open while not in use.

Some pipes run through cabinets. To keep the temperature in the cabinets from dipping to the freezing point, we suggest you keep the cabinet doors open. You can use a similar tactic and keep the vanity doors under the sink open as well. The pipes under the sink are not as likely to freeze due to the constant use, but leaving those doors open overnight could be a precautionary measure that may keep some of your most important pipes from freezing. Small adjustments like these can help you keep pipes from freezing in the most inopportune places.

Find and close any cracks or holes around your pipes. Sealing up cracks and holes around the cabinet pipes or other pipes can stop cold air from coming into the kitchen. Caulk and foam insulation are great at preserving heat within your home. To be sure that the holes are completely sealed, you can fill the holes from both the interior and exterior of the house.

Heating tape is another form of insulation that is simpler to employ. Heating tape is best used on short sections of a pipe that are the most likely to freeze. Heating tape can either be automatically turned on as it detects the temperature around it, or can be turned on manually by the homeowner.

If you found that some of your pipes have frozen, you will want to fix the problem as soon as possible. As we said before, water expands when it freezes, and expansion in a pipe can cause a lot of damage. Even if you manage to thaw the pipe, you will probably have to fix a leak. A good plumber will be able to fix any cracks that may have formed in a frozen pipe, so call one as soon as you notice that any of your pipes are frozen. Waiting to do so could result in serious damage to your plumbing as well as water damage to the rest of your home.

Get Help with Frozen Pipe Damage

Using one or a combination of the above methods will help you avoid property damage and feel at ease. Living in a place that is safe from sudden hazards is an important aspect of feeling relaxed in your home. If you would like professional advice or assistance with any of the above methods, feel free to contact us. We have extensive experience helping protect homes from cold winters and avoiding frozen pipes. We offer free consultations and we would love to help you protect your home!